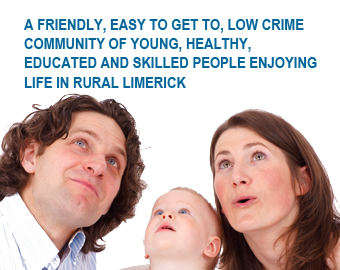 Rathkeale (the Rising Rural Town) is a friendly town just off the N21 road about 15 minutes from Newcastle West. Its location puts the it within 20 minutes of 14,000 people, excluding the 94,000 who live in Limerick City. With the opening of the Foynes to Limerick motorway (Adare Bypass,) Rathkeale will be more accessible to Limerick City.

The townland is home to almost 1,700 people in about 600 households. In 2018 almost 70% of the population was under 50 years of age with about 20% aged 30 to 34, the typical marriage and first home buyer group. On average Rathkeale welcome 22 new babies per year. Its elders (70+ years of age) represent 14% of the community. Almost 80% of the population claims to be in good health.

Almost half of Rathkeale workers are skilled, professional, managerial and/or technical. A quarter work in the Professional Services and Public Administration sector. An additional quarter work in Commerce and Trade. Almost a fifth work in Agriculture and Construction. Manufacturing and other industries account for the rest. Over 80% of the adult population is formally educated with 25% having third level, professional, technical, certificate level or apprenticeship qualifications. Just 4% of Rathkeale workers are unskilled.

61% of Rathkeale people live in their own home and 34% rent. Over 70% of households have one or more cars. The average journey to work or school is less than 15 minutes for over half of all commuters. Half of all households have personal computers and it’s hard to imagine anyone without a smartphone.

Taken at face value, a review of PSRA values for residential property sold in 2020 Limerick showed Rathkeale had the 2nd highest average value (after Adare) among 12 comparable towns. It also had a higher average than the Limerick County average (€216,228.) Comparable towns are near Rathkeale or have similar populations and include Abbeyfeale, Adare, Askeaton, Ballingarry, Bruff, Clarina, Croom, Doon, Foynes plus Shannagolden, Monagea, Newcastle West, and Patrickswell. The average price in Rathkeale was €236,002. However, while interesting, PSRA data is unreliable, it cannot be used as a Property Price Index and Covid likely resulted in an odd year.

Culturally, Rathkeale is Irish, Catholic, overwhelmingly white but a little more conservative than the rest of the country. It also a community with more than its fair share of accomplished athletes who compete at the Olympic, international, national and regional level.

Unlike other small towns it boasts a notable Traveller community. Some live in the town all year while others stay at their own houses between the months of December and March – just one of the reasons why Rathkeale has the best St. Patrick's Day parade in the county.

By mid-November in 2020 Rathkeale had the lowest crime in the Newcastle West Garda District of 31 towns with most categories falling below the threshold for statistical reporting. At the end of 2019, the last year for which reports are published, crime reports to the Rathkeale Garda station had fallen dramatically since 2010.

Statistics from the 2016 Census as interpreted by David Lamont of the Rathkeale Community Council.
Crime rate numbers based on the Central Statistics Office Recorded Crime Offences (Under Reservation) by Garda Station and the 2016 population census.